So Heart Beat EP has now been out for three weeks. We released a music video for 'Falling' two days ago and, despite getting a slightly slower start than the 'Can You?' video it really starts to be gaining some traction now.

It has been my plan for a while now to make a music video for each track. I've been location scouting for the 'Little Man' this week, and we've got a cool idea for 'Heartstrings', involving puppets, which I've still got to make! As the first track on the collection I think it works quite well to have it as the last video, although I realise we're working completely against convention by even bothering to do four videos for an EP release: that's kinda the point!!

We had our last rehearsal session for a while earlier this week as James has gone off on an epic four week holiday, lucky bugger! We won't be sitting idly though. I have almost four weeks to the day to write my dissertation (if you didn't know I am studying the Music Industry Innovation and Enterprise MA course at WaterBear in Brighton). Also we've got another ten songs to release, which we've recorded most of the parts for! So we'll be taking our usual sessions and using them to record vocals, backing vocals, and little over-dubs. As well as recording some demos for some new songs, I expect, as there are 5-6 sketches of songs we've been trying out that need their arrangements finnesing. I suppose I just wanted to say all of that as an affirmation that we're not planning on slowing down with the output any time soon!

We've had some nice little blog write-ups, and ended up added to probably more Spotify playlists than we deserve already. Starting out with this EP my primary goal was to grow the followers and subscribers on Spotify and YouTube. I think these platforms, while they are not ideal in terms of their royalty payment structure, are actual the best places to find and follow new music nowadays, especially if you don't have mainstream tastes. At the same time as trying to grow our presence on them I am trying to engage with them uncynically as a music fan. Anyway, this is straying into TL;DR territory so I'll leave it there. Bye!

Only two days to go until our Heart Beat EP gets its main release to DSPs (digital service providers) and we've had a lovely review from Brighton Source in their Totally Sourced round up of great new music!

It's a great little write-up, and very positive:

"Fragile Creatures (pictured), the band led by Hove schoolmates Adam Kidd and Aaron Kieran Neville, produced a well-received debut album in 2016. However, they have since gone completely independent and recorded their second record themselves. The first four of fourteen tracks emerging on their new ‘Heart Beat’ EP exhibit flavours of The Beatles, classic 70s yacht rock and 80s/90s indie rock all wrapped-up with tight production. This is classic pop songwriting from a band that have clearly grown together musically. Fragile Creatures have produced a collection of endearing power-pop songs and we’re already looking forward to hearing the next instalment. (JS)"


Check out the whole article on the  Brighton Source website, they've got some cool tracks from great local acts like Octopuses, Gulls and Family Fiction.
Family Fiction are another band we can add to a long list of Brightonian 'F' bands. One day we will curate of festival featuring Fragile Creatures, Fierce Friend, Fiction Aisle, Fukushima Dolphin, Fujiya & Miyagi, The Family Grave, and now Family Fiction too! Fantastic.

At the weekend we also filmed a music video for Falling from the EP dressed in white. 'F' coincidence? Are there any coincidences? 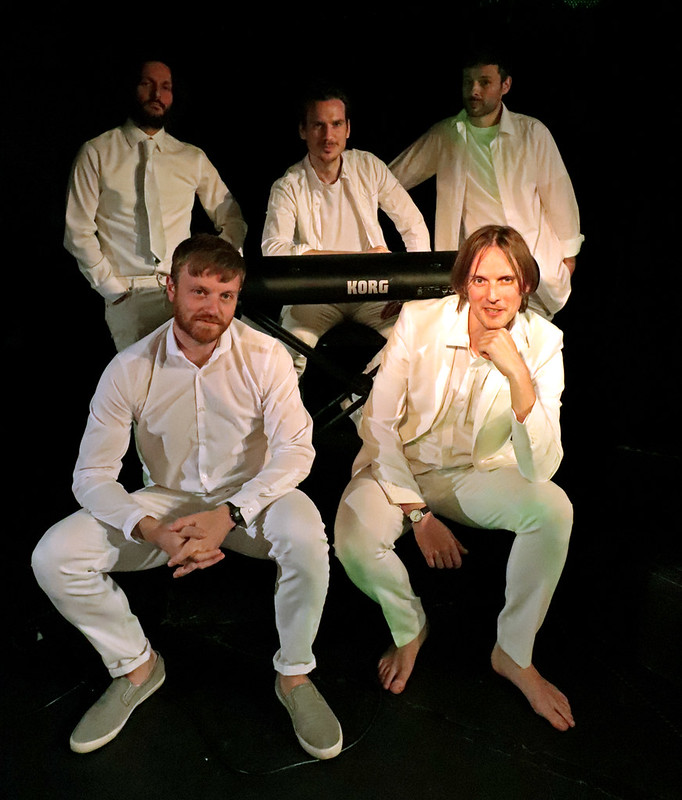 It's up on Bandcamp for you to pre-order, which will give you an immediate download of 'Can You?' (assuming it's working properly, never done this with Bandcamp before! Why would you want to pay for a download in 2019? Well, Fragile Creatures are fully indpendent now, everything has been done on a shoestring, so we need all the help we can get. Any money you spend on this release will go into the marketing budget. Let's try and grow this baby to new heights!

Announcing the Heart Beat EP - Can You on BBC radio tonight!

I've been holding off an official announcement about our Heart Beat EP until I had all the pieces in place, but an exciting development has made me move things up a couple of days. Yesterday we finished mixing and mastering Can You?, which is going to be the first track you'll hear from the EP. I sent it to a couple of DJs, and uploaded it to BBC Introducing, expecting to hear back in a few weeks... but then I got an email last night telling me that BBC Sussex are going to play it tonight!

BBC Music Introducing: The South will be live on air from 7-9pm tonight, you can listen live on 104.5FM, or online through the iPlayer, or DAB. Here's a link to listen after the show's finished, in case you can't tune in while it's happening! https://www.bbc.co.uk/programmes/p072v3qw

Heart Beat EP is the first fully independent release from Fragile Creatures, it's going to come out on May 3rd, but will be available for pre-order from April 5th, with 'Can You?' immediately downloadable using the iTunes 'instant gratification' thingamajig! Not only are we releasing this ourselves, we also recorded it. When our album came out, three years ago now, I was frustrated by how long everything took - so James and I bought various bits of recording equipment and, using all the information we could find from YouTube, and things I'd picked up looking over the engineer's shoulders in all our recording sessions, we figured out how to do it ourselves.

It's so exciting that a song we recorded from scratch will be played on BBC Radio... and it's amazing that is happening just 24 hours after the mix was finalised! It would mean the world to me if you could listen in tonight and text/tweet the show to let them know you're there. And also please get back to us afterwards, and let us what you thought of the song and the sound of it. Have we managed to pull this off? Only time will tell.

Thanks so much for listening!

Seeing as there is a massive petition growing on parliament's website at the moment to revoke article 50 (currently 4.4 million have signed), and a huge march in London today, calling for a People's Vote/Second Referendum (which I sadly could not attend), I thought I'd have a bit of fun and make a playlist on the theme!

It's available in YouTube and Spotify versions. If you want to suggest a song that fits drop me an email: This email address is being protected from spambots. You need JavaScript enabled to view it.